3-dimensional locations are defined by an X, Y, and Z coordinate

THIS IS IMPORTANT!  How are these X, Y, and Z values referenced to the Earth’s surface?  You can NOT assume that all X, Y, and Z values are the same!  Some X and Y coordinates measure in feet, some measure in meters, and some measure using degrees.  The Z value typically represents elevation, but elevation can be measured in feet, meters, centimeters, and many/any other unit desired.

Before we can map a feature (a thing) in the GIS, we must define the the surface on which they will be mapped.  If we don’t do this, nobody will know what or where the coordinate pair,  (x:296000, y:3580000) for example, falls on the surface of the Earth.  Furthermore, you want to apply the same mapping surface for all features mapped or analyzed in a project.  Even more, some mapping surfaces work well in some areas but not others.  We will explore approaches to defining the this surface using a Spherical coordinate system and a Cartesian coordinate system. 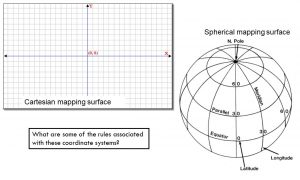 A geographic coordinate system (GCS) uses a three-dimensional spherical mapping surface to define a point on the Earth’s surface.  Most GPS receivers default to recording locations using latitude, longitude, elevation – this is a GCS.

Components of a GCS

Spherical coordinate system works well for mapping locations on a round surface.  However, if you need to produce a flat map, you must figure out a way to accurately flatten that round surface.  We use a map projection for this task.  Be careful, though, this process WILL introduce error (in shape, size, direction).  Your task is to select a map projection that minimizes these errors.

“Map Projection” A method by which the curved surface of the Earth of portrayed on a flat surface. This generally requires a systematic mathematical transformation of the lines of longitude and latitude onto a plane. (from the ArcGIS 9.2 Desktop online help)

Projections are designed to minimize distortion in one or more of the following areas:

Two map projections you need to be familiar with: Lambert Conformal Conic and Transverse Mercator