The FAA Modernization and Reform Act of 2012(1a, 1b), the FMRA, is legislation mandating the FAA to develop a comprehensive plan to integrate small unmanned aircraft systems (sUAS) into the national airspace.  Among many issues addressed was how to accommodate hobbyist and recreation model aircraft enthusiasts.  Section 336 of the FMRA addresses the use of sUAS for noncommercial recreational and hobby purposes.  Advisory Circular 91-57A provides further guidance to persons operating unmanned aircraft for hobby or recreation purposes.

For any person who engages in model aircraft operations…

6a, the legal definition of an aircraft and a model aircraft.

6b, a warning to those who endanger the safety of the National Airspace System (NAS)

Model Aircraft Hazards in the NAS. While aero-modelers generally are concerned about safety and exercise good judgment when flying model aircraft for the hobby and recreational purposes for which they are intended, they may share the airspace in which manned aircraft are operating. Unmanned aircraft, including model aircraft, may pose a hazard to manned aircraft in flight and to persons and property on the surface if not operated safely. Model aircraft operations that endanger the safety of the National Airspace System, particularly careless or reckless operations or those that interfere with or fail to give way to any manned aircraft may be subject to FAA enforcement action.

6c, the determination of what may be considered a “model aircraft operation” as it relates to section 336 of the FMRA

6d, right of the Administrator to pursue enforcement

Public Law 112-95, the FMRA, recognizes the authority of the Administrator to pursue enforcement action against persons operating model aircraft who endanger the safety of the National Airspace System. Accordingly, model aircraft operators must comply with any Temporary Flight Restrictions (TFR). TFRs are issued over specific locations due to disasters, or for reasons of national security; or when determined necessary for the management of air traffic in the vicinity of aerial demonstrations or major sporting events. Do not operate model aircraft in designated areas until the TFR is no longer in force.

Model aircraft must not operate in Prohibited Areas, Special Flight Rule Areas or, the Washington National Capital Region Flight Restricted Zone, without specific authorization.  Such areas are depicted on charts available at http://www.faa.gov/air_traffic/flight_info/aeronav/.  Additionally, model aircraft operators should be aware of other Notices to Airmen (NOTAMS) which address operations near locations such as military or other federal facilities, certain stadiums, power plants, electric substations, dams, oil refineries, national parks, emergency, services and other industrial complexes. In addition to the previously mentioned link, information regarding published NOTAMS can be found at: https://www.faa.gov/air_traffic/publications/notices/.

The requirement to not fly within TFRs, or other circumstances where prohibited, would apply to operation of model aircraft that would otherwise comply with section 336 of Public Law 112-95.

All other operators and for additional information on Unmanned Aircraft Systems please visit: http://www.faa.gov/uas/ 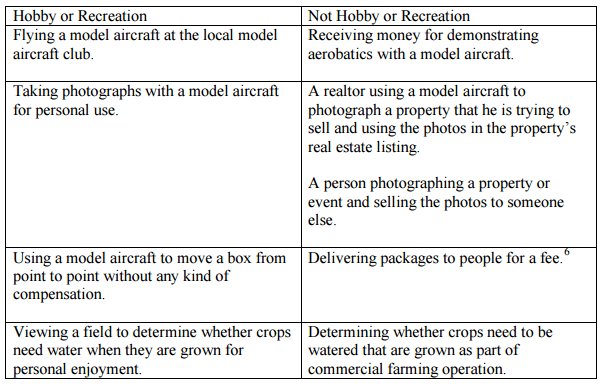 Clarification Regarding Educational Use of sUAS(3)

If an unmanned aircraft is operated as a model aircraft in accordance with section 336, then it does not require FAA authorization.

FAA informational website for hobby use of sUAS (https://www.faa.gov/uas/getting_started/fly_for_fun/)